Staying In The Game

One of the unique things about top-notch athletes that makes them so popular is their ability to not only withstand pain, but to play through it and still be effective. Hockey players are routinely stitched up during games (sans anesthesia); football players oft times play with broken and separated appendages; and some athletes

survive deadly illnesses to accomplish unrivaled heights in the mastery of their sport.

This quality of dogged determination, grit, and indomitable spirit is as inspiring as it is truly difficult to appreciate. Who can forget Ronnie Lott finishing not just the game, but the season with a crushed finger, and then choosing to have the tip of his finger amputated just so he could play in the following season.

Or the image of Byron Leftwich being scooted down the field by his lineman to the next line of scrimmage, or else risk a delay of game penalty, because their field marshal 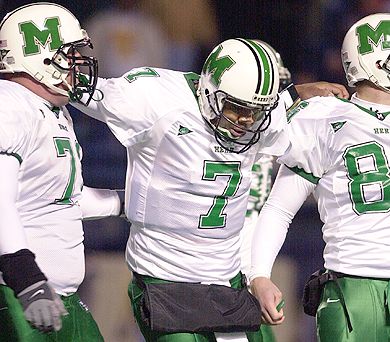 was hobbled with a broken shin.

Troops in Iraq and elsewhere have tried to avoid being pulled out of combat units by cheating on problem-solving tests that are used to spot traumatic brain-injury problems, military doctors say.

“With highly motivated individuals, be they athletes, be they our servicemembers in harm’s way, there is a motivation to stay with the unit and stay on the job or stay in the game,” he says.

“We know what they are doing,” [Army Col. Stephen Flaherty] says. “We’re just trying to protect them, make sure they are healthy and get back to fully functional status as soon as possible.”

Earlier in the war, Jaffee says, military physicians noticed some cheating, particularly among Marines at Camp Pendleton in California, where testing started in 2004.

Playing hurt is not always the best option, and it can put your teammates in peril if you are not on top of your game. But that grit and ears-pinned-back attitude demands admiration.

The military has come up with new versions of the test to thwart the cheaters, who had memorized the answers to the old test. And well it should, for cheating is not only dishonest but dangerous. Jaffee says soldiers who fight despite brain injuries risk being “exposed to a second concussion or mild traumatic brain injury. It could have more devastating effects not only on their health, but on the mission’s success, or perhaps on the safety of the people on their patrol.”

Yet while the cheaters’ actions are wrong, their determination is admirable. Their eagerness to serve their country in combat belies the liberal stereotype of soldiers as victims–a stereotype that might have had considerable truth in the era of conscription but that, like much of what passes for liberalism these days, has long been outdated.

That eagerness also belies the “support the troops but not the mission” fallacy. Obviously these soldiers are professionally and personally interested in accomplishing their mission. The lengths that they will go to, and the pain they are willing to endure in order to succeed should give anyone pause who claims to support the troops while hating the war.

In any case, if you’re looking for inspiration, you can hardly do better than our men and women in uniform. You can start with QandO’s Project Hero.

Trackback URI | Subscribe to the comments through RSS Feed